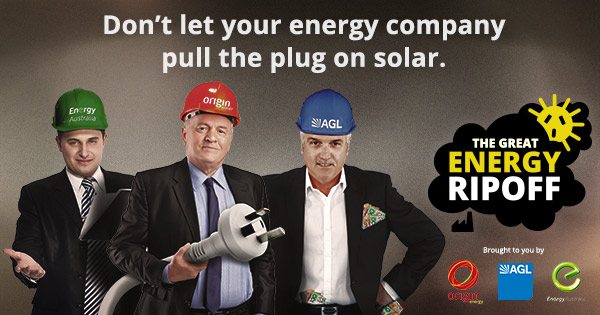 They might try to tell you they’re fighting for our clean energy future – but Origin Energy, EnergyAustralia and AGL are not as green as you think. Here are 10 things they’re trying to hide from you.

They might pretend to be green, but The Dirty Three – Origin Energy, EnergyAustralia and AGL – are still massively invested in dirty fossil fuels. In 2012-13, renewable energy only made up around 1 per cent of total electricity produced by each company.

2. They’re some of Australia’s biggest polluters

The Dirty Three are among Australia’s largest emitters of greenhouse gas pollution: EnergyAustralia is in second position, Origin Energy is ranked 7th. AGL is currently the 4th largest emitter – but could be responsible for over 20 per cent of Australia’s greenhouse emissions if they are successful in acquiring Macquarie Generation.

The Dirty Three account for about 77 per cent of the household market, and are using this power to undermine new wind and solar projects. Several reports show Origin Energy and EnergyAustralia blocking new renewable energy projects by refusing to sign power purchase agreements.

At a time when AGL, Origin Energy and EnergyAustralia should be preparing for the renewable energy revolution – they have invested significantly in coal and gas. In the last five years:

6. They’re hiding the truth about the RET

Despite what The Dirty Three might tell you, the Renewable Energy Target is hugely successful. Since it was established in 2001, it has:

7. They’re coming after your solar panels

In the last decade, over two million Australians have switched to solar, yet AGL has called for the removal of the part of the Renewable Energy Target which supports rooftop solar panels and solar hot water. 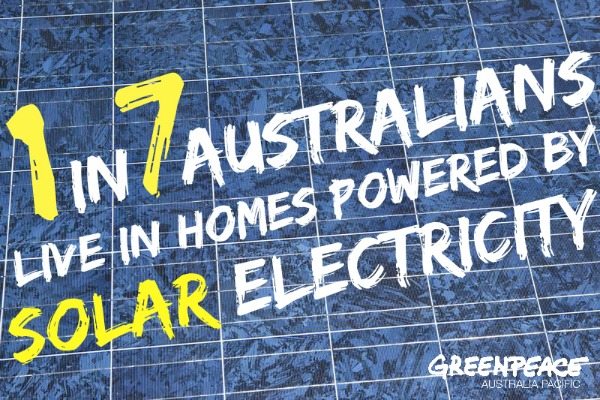 8. Scrapping the RET will cost you and make them money

Recent Bloomberg analysis shows that winding back the Renewable Energy Target would deliver energy companies a massive $70.2 billion in extra revenue between 2015 and 2030.

Meanwhile, destroying our Renewable Energy Target risks adding an extra $50 on household electricity bills each year by 2020 and $140 a year beyond that.

9. Renewable energy is not the main driver of power bill rises

While it’s true that consumers have faced rapidly increasing retail electricity prices over the last few years, the investments in solar and wind power created by the Renewable Energy Target have actually reduced wholesale power prices.

10. Renewable energy is viable, reliable and ready to go

While The Dirty Three have created uncertainty over whether the industry can actually meet the Renewable Energy Target, data from the Bureau of Resource and Energy Economics (BREE) shows that there is a sufficient level of ‘ready to go’ projects in the planning pipeline to exceed the 2020 target.

And not just that – the Australian Energy Market Operator has found that a national electricity market based on 100 per cent renewable energy is technically feasible.

You can find all the facts from above and more in Greenpeace’s new report: The Dirty Three.

We owe it to ourselves and future generations to make sure we do everything we can to keep Australia on course to depend less on fossil fuels and more on clean energy sources like wind and solar power – take action to save the Renewable Energy Target here:https://www.greenpeace.org.au/action/?cid=71&src=GP3